J. S. Mill and others have observed that many religious people avow and even defend their beliefs with perfect sincerity, but do not even imperfectly live or behave accordingly. This is not mere weakness of will. It can be sheer self-deception. But it can also be a fictionalism. Philosophers have catalogued a number of kinds or styles of fictionalism; this talk will focus on one sort of mythological thinking and acting that is not pretense or fake but might be called “living in the story.” Such thinking does have to be positively sustained, at least unconsciously. Is it a good thing to do, or is it objectionable? The talk will conclude by listing a number of genuine virtues and benefits that religious fictionalism affords. The public lecture will be held on Tuesday, 22. October, 6:00 p.m. in GA 03/49. 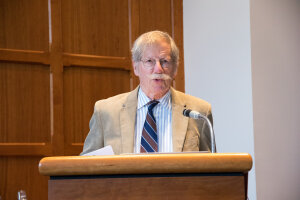